John Henry St. Clare Walker was born in 1876 to William and Jane Walker. He was the oldest of 15 children. They lived near the Mill Pond in Haleys, Virginia.  Haleys Post Office was located in the Storemont/Locust Hill, area of Middlesex County. There were no schools for black children in those days, but St. Clare Walker learned to read in the home of a white family that recognized his passion for learning.

St. Clare Walker joined the army and fought in the Spanish-American War. Afterwards, he attended the Hampton Institute. He was able to attend classes in the summer and teach in the winter months. With this as his schedule, he completed a  B.A. and M.A. in Education. He loved Hampton Institute and kept in contact with the Institute long after he had graduated. As a matter of fact, Hampton Institute became his source for books and other resource materials as he dedicated his life to bringing education to blacks in Middlesex County. 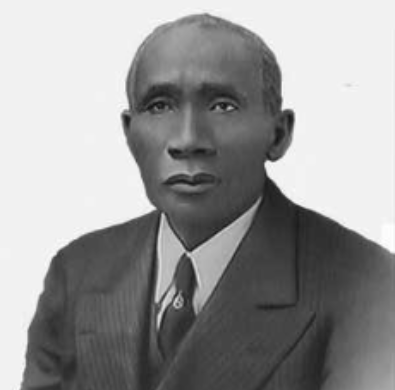 St. Clare Walker taught first in Lancaster County, in a one-room school at Merry Point. He came to Middlesex County to help build a four-room school named "Dunbar" on property belonging to First Baptist Church in Amburg. Although the school is no longer there, it remains the historic beginning of "formal" education for black children in the county. St. Clare Walker stayed there, as an instructor, for 20 years.

Later, St. Clare Walker was appointed as the principal of the Middlesex Training School. The original building that housed the school burned in 1936, however, the school moved to a white building that is still standing on Rt. 33 in Locust Hill. St. Clare Walker remained the principal there for approximately 20 years. His goals included gaining accreditation for the school. Many of the salaries he paid to qualified teachers were supplemented from his own salary. Eventually, the teachers were put on the School Board payroll.

Welcome to the SchoolBlocks
self-guided tour!

The most common question we receive is, how is SchoolBlocks inspired by Pinterest? SchoolBlocks eliminates navigation bars and uses a block style layout that’s similar to Pinterest. It creates a unique and engaging browsing experience, optimizes for mobile and removes a lot of navigational complexity.

Please click on the red plus signs found on this page to learn more about specific features.